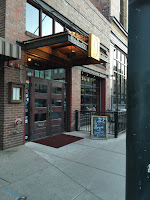 We have tried many different restaurants since starting the blog, but The 9th Door is the first Tapas restaurant we have visited.  The 9th Door is located on Blake Street and 18th in downtown Denver next to the Vesta Dipping Grill.  We visited Vesta a while back and noticed The 9th Door at that time.  We have been looking forward to visiting the restaurant ever since.

Please note there is no parking lot for The 9th Door so bring some extra cash for street parking or any of the pay parking lots in the area.

The 9th Door is one of those adorable, smaller scale restaurants that are so abundant downtown.  Exposed brick, low lighting, and flowing fabric dividers stand out against the beautiful red and orange backdrop of the room.  The bar is simply beautiful being fully bathed in an orange glow.  There are two televisions at the bar allowing patrons to watch a game and eat at the same time; however, the televisions do not distract people in the rest of the space.  The dining area consists of booths and tables, and they do have a patio for the warmer months. 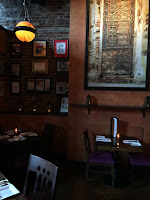 As we stated, The 9th Door is a smaller space so if you are planning on dining there, we would suggest making reservations ahead of time to ensure you have a table.

Tapas by definition are a variety of small plates, appetizers, or snacks in Spanish cuisine.  The basic idea of serving Tapas is to encourage conversations and sharing of the food.  Because people are not as focused on eating an entire meal, they can order more of a variety and try a larger selection of the menu.

The menu of the 9th Door is broken down into several sections which include Tapes Frias (cold dishes such as meat and cheeses), Tapas Calientes (hot dishes consisting of ham, beef, chicken, etc.), Postres (desserts), Vinos Dulces (sweet wines to be served with dessert), and Café and Te (Coffe and Teas). 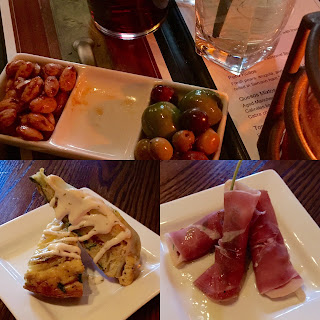 From the Frias page, we ordered the Aceitunas Alinadas y Almendras or marinated mixed Spanish olives and toasted Spanish almonds; Pera Rollos which are fresh pears, arugula, and idazabal cheese rolled in Serrano ham; Tortilla a la Espanola a traditional Spanish omelet, and the Jamon Iberico which was a very interesting dish.

Jamon Iberico is the finest ham in the world and it just recently became available in the United States. These free-range pigs are raised in the oak forests along the border between Spain and Portugal, and are fed only acorns during the final period of their life. After slaughter, or “sacrifice” as they call it in the region, their legs are covered in Andalusian sea salt and cured for 36 months before being served.  This is a very thin, sliced pork and is very salty and rich.  It melts in your mouth and is served with slices of bread.  This was absolutely delicious as were all the Frias selections.  In fact, we don't have any complaints about any of these dishes. 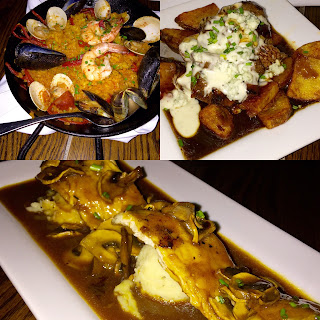 From the Calientes menu, we chose one of the evening's specials, the Paella.  Paella is considered by many to be the national dish of Spain.  Served in a small, traditional Paella pan, it consisted of Spanish rice with pochero peppers, chorizo, clams, and mussels. We also ordered the Pollo Oloroso a sautéed chicken breast with Oloroso sherry mushroom sauce and manchego mashed potatoes.  The Filete con Cabrales - a beef fillet with Rioja wine reduction and Cabrales blue cheese sauce served with spiced potatoes is our favorite of the evening.  Although many of these dishes seemed to be traditional Spanish fare, the chicken and beef dishes seemed to be more of a "comfort food" dish than the others. 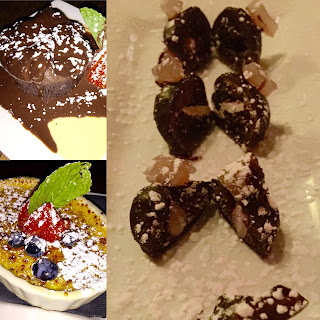 For dessert, we just HAD to have crème brulee.  As you know, it is one of our favorites and that being the case, if it is on the menu, we order it.  The 9th Door serves a Crema Catalana or cinnamon and vanilla bean Catalan-style crème brulee.  This was amazing.  The cinnamon was not overpowering and paired really well with the vanilla and custard.  We also tried their Chocolava or warm chocolate cake with a rich ganache center, served on an orange crème angelaise.  Probably the most interesting dessert option was the Higos Rellenos or chocolate covered, almond stuffed figs with candied orange.  These were chewy from the figs, crunchy from the almonds, sweet from the chocolate, and even finished with a slightly sour taste from the oranges.  We loved this very interesting dessert and it's many textures.  This is a must try when you visit The 9th Door.

In addition to the food, we tried some wine from Chile and for dessert had a glass of their tawny port.  Very tasty!

We really like The 9th Door.  It is a fun and economical way to have a high end dining experience without breaking the bank.  Not only is this a great place to dine on your own because of the small portions, but it is also a great place for a large group because you can order many different things and try a little bit of each.  We also like the fact that the food was simple and straight forward.  The dishes had only a few ingredients but were combined really well.

Another interesting thing about the 9th Door is the fact that they serve many dishes with ham.  Most of the places we visit have the usual chicken, beef, and fish options but very few places serve ham.  Of course this is because ham is such a large part of the Spanish culture, but it was a nice change from our typical selections.

Our server, Lydia, was very accommodating and offered many suggestions for our first trip to The 9th Door.  They are participating in Denver Restaurant Week which is from February 26th to March 6th this year.  This would be a wonderful time to give them a try.  For a wonderful experience we give The 9th Door a fork.  We'll be back for sure!

Posted by DataOrganizer at 10:14 PM