What's not to love about locally sourced meats and vegetables, a dynamite staff, and seasonal cocktails that are based on classic rock and roll albums?  Um, nothing.  Not a thing.  Therefore, stop reading this and go eat at Blackbelly Market immediately.  Thanks for playing.  Have a good day and thank you for supporting MenuManiacs.

Just kidding.  Don't worry, we'll tell you more.  Settle down.  Geez, you guys are so demanding.

Blackbelly Market is located on the west side of Boulder near the intersection of Arapahoe and 55th in a strip mall-slash-office park hybrid.  Blackbelly is not only a great restaurant but it is also a butchery.  Actually, it is two shops in one!  One half of the property is a butcher and deli that serves breakfast burritos and delicious sandwiches.  Next door to the butchery, they have a dining space that opens in the evenings.  Ian, the manager, was kind enough to show us around the deli side during our visit and we hope to get back soon to try breakfast or lunch, or breakfast AND lunch, or basically whatever they put in front of us because it's all delicious. 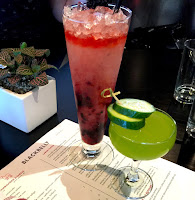 The restaurant has a blend of industrial and modern elements making it feel contemporary and cozy.  They have an amazing bar and we have to give a props to them for the incredible drinks we enjoyed. One of the things that sets Blackbelly apart from other places is their quirky sense of humor,  Each month their master mixologist creates new cocktails using music as inspiration.  In the month of June, the cocktail menu was based on songs off the Slippery People album by Talking Heads.  July's inspiration came from Van Halen's classic album, 1984.  We told them to surprise us with a cocktail.  What they brought was a delightful concoction called Jump!  Sparkling water with fresh blackberries, bitters, and of course Panama rum.  See what they did there?  Van Halen...Panama...Panama rum.  Oh, we just love that.  It was refreshing and fruity without being overly sweet which is exactly how one might describe Van Halen now that we think about it.  Huh.  Interesting.  Anyhoo, it was perfect for a hot afternoon. 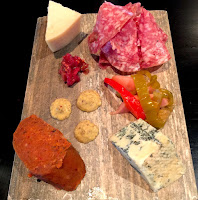 Charcuterie and Cheese are some of the most popular items on the menu at Blackbelly.  In fact, they are in the process of opening a Charcuterie Bar where people can sit and watch the preparation of a variety of meats and cheeses.  We were told they have a state of the art slicer that creates very thin slices of meat.  After all, the thinner the slice, the more intense the flavor.  You can pick and choose your selections or you can order the grand selection of all the options Blackbelly has to offer.  We suggest the Genoa salami and their bay bleu cheese.  They are astounding.  If you can't decide, the staff is incredibly well versed in pairing meats and cheeses to your liking. 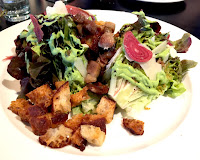 From the soup and salad section of the menu, we ordered the carrot-ginger soup and the local romaine wedge.  The soup was served warm which was unexpected.  When sampling carrot soup in the past at other establishments, it has been served chilled.  It was delicious with date mastardo, almonds, and spiced yogurt.  The soup was mild without being overpowered by either the ginger or carrots.  The salad was one of the best we have had in a while.  Their house made green goddess dressing was so flavorful and the fresh greens were amazing. 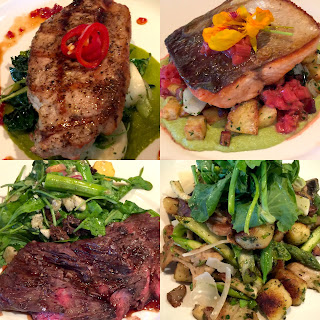 For dinner, we ordered the Colorado Angus Bavette Steak, the Golden Potato Gnocchi, Wild Sockeye Salmon, and Colorado Berkshire Pork.  We also added a side of marrow butter for something new and different.  From their sides selection, we ordered Creamed Greens and Roast Local Carrots.  Everything on this menu was excellent.  The meat served at Blackberry is some of the freshest and most delicious we have come across thus far.  Probably because 80-93% of the meat is sourced from local Boulder farms.  They acquire their salmon fresh from Washington state.  One of the interesting revelations of the evening involved the greens served with the meals.  They were so flavorful and fresh that the non-vegetable faction of our party actually grabbed second and third helpings.  That included fresh asparagus.  Asparagus, people.  Asparagus. 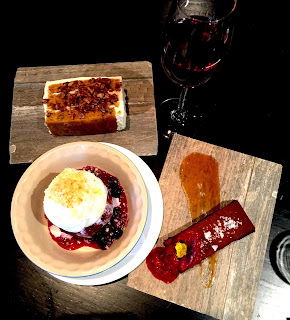 We would like to commend the manager, Ian for being so personable and friendly.  He is very knowledgeable about wine and the entire menu.  Our night started out with a snafu regarding our reservation (not their fault), but the staff dealt with it without even a trace of bad attitude.  Erick and Makenna helped us with our meal delivery and both were fun and friendly.  Last but not least, Lenny our main server was hilarious, knowledgeable, and is basically our new best friend.  Also, as a side note, Lenny is a famous giver of hugs.  Be sure to request him when you visit.  He's the cherry on the sundae of the experience. 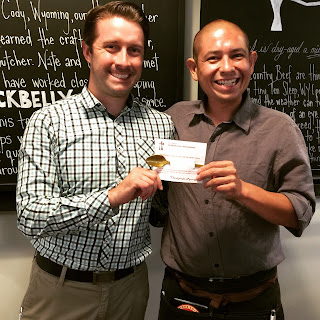 Blackberry is safely nestled in the upper echelon of our favorite restaurants.  We will definitely come back as soon as we can. We awarded them the coveted golden spoon simply because they are awesome.

Do yourselves a favor and get to Blackbelly immediately.  We're not kidding, they are that good.

....Wait, you're still reading this?  Seriously.  Go to Blackbelly.

Posted by Dinner is Coming - Ellen at 9:56 PM No comments: 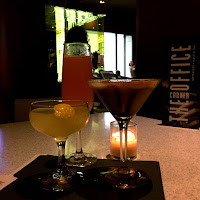 We here at MenuManiacs HQ are fastidious about our blog dinners.  We randomly select a restaurant and do very little research before we go.  Mainly because we want to experience the restaurant with an open mind and not be swayed by other reviews or opinions.  This particular trip we failed.  This outing was a birthday celebration which meant it was the birthday girl's choice.  In the course of figuring out which restaurant we would be visiting, she discovered The Corner Office was the winner of OpenTable's 2016 Diner's Choice Award.  Unfortunately, this little nugget of information led to us having higher expectations than we should have had. 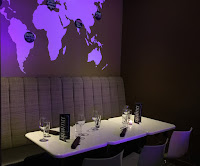 The Corner Office has an awesome atmosphere.  Attached to The Curtis Hotel, it has a great contemporary feel with beautiful decor and high attention to detail.  For instance, using file folders as menus was just adorable.  They have a varied martini bar and some very creative cocktails of both alcoholic and buzz-less varieties.  One of the table favorites was the Honey Pot containing sage, local honey, lime, grapefruit, sparkling water and pomegranate juice.  If anything, we would recommend The Corner Office for their happy hour or as a place to meet a group of friends for a drink after work.

Every Sunday, they have a Disco Brunch.  This is probably the most popular event offered at this restaurant.  We have heard how fun this is; however, after our experience, it will probably be a while before we return.  Ugh, it really pains us to say these things. 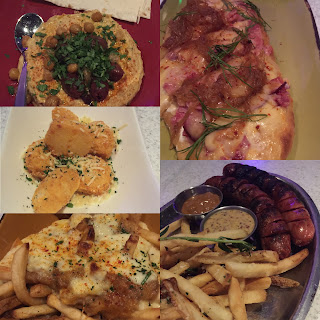 From the Breads & Spreads menu, we started by ordering their Brazilian Cheese Bread made from tapioca flour, manchego, and parsley as well as their Hungarian Flatbread with surryano ham, Gouda, and canalized onion.  In addition, we tried the house made garlic hummus.  These were all very good, especially the Hungarian Flatbread.  It is difficult to go wrong with Ham and Cheese.  From the Bites & Snacks section, we ordered the Pouline, French fries smothered in duck gravy and cheese curds.  We also tried the Local Sausages and Fries.  This included two different types of local sausages, black garlic and Belgian beer mustard and herbs.  As far as appetizers go, we had no complaints.

Then, things took a turn.

We moved on to the Large Plates section of the menu.  We ordered the Fillet Au Poivure.  This was served with a brandy reduction, horseradish aioli, giant onion rings, and olive oil whipped potatoes.  Oh wait, no.  Instead of the whipped potatoes, we were brought plain French fries with no explanation.  When we asked our server about this, we were told they just didn't have any whipped potatoes.  There was no offer of an apology or even suggestions on possible replacement sides.  We had already had fries with the Poutine and Sausages so we were hoping for something different.  Tikka Masala was the next item ordered.  The traditional marinated chicken, peas, jasmine rice and Naan was flavorful although a little bit too salty.
One of the better dishes ordered was the Strozzapreti Bolognese which was slow cooked Heifers beef and hops with smoked bacon and Grana Padano.  Unfortunately, the next and most expensive dish turned out to be the biggest disappointment.  The Double Cut Pork Chop "Cubano" was a nice presentation and the description of a pork chop served over a savory ham and Swiss bread pudding with crispy yams, mustard, and cornichon sounded amazing.  Unfortunately, the meat itself tasted like it had gone bad.  It had a rank flavor for lack of a better term.  In addition, the meat was incredibly salty.  Almost like they were trying to cover up the flavor of the substandard meat.  We don't normally say this type of thing but it was just plain awful.  It brought the party to a halt fairly quickly.

We were really interested in trying their sizzling rice bowl of marinated steak, egg, zucchini and hosin.  This was spicy and was really a beautiful dish.  The Bacon & Egg Ramen bowl comes with egg noodles, tender belly bacon, a 62 degree egg, rapini, and hash browns.  Unfortunately, as good as this sounds, it fell flat and was pretty tasteless.  We all felt the broth tasted strange and we were left unimpressed.

We also ordered sides of the roasted Brussels sprouts and cauliflower gratin.  They were OK, nothing special or exceptionally unique. 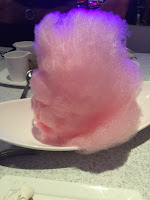 In the past, there have been a few places that were saved by the dessert menu.  The Corner Office is one of those places.  Good save, The Corner Office.  Good Save.  The favorite thing from this menu was Cotton Candy.  Freakin' Cotton Candy, people.  In addition, we ordered Tiramasu, Dark Cherry and Poppy Seed Streusel, Salted Caramel Affogato cake, and New York Plain Cheesecake.  The "Old Fashioned" Pots De Crème was probably the favorite dessert of the evening.  This was really good made with chocolate, candied orange peel, bourbon infuser, brandied cherries, and whipped cream.

By this time, we were less than happy.  We aren't sure what the problem was that night, but the service was not good.  It was incredibly slow.  We had trouble finding our server for drink refills and to remind him that we needed our food.  After a long absence, he finally reappeared completely reeking of cigarette smoke and complaining about having a bad night.  This is a no-no for the MenuManiacs.  Basically, they stepped in it and tracked it inside.   In fact, some of the things we ordered that night never even made it to the table.  The manager did come by the table; however, he seemed confused about our complaints and acted like he didn't know what to do or how to act after we told him about our bad experiences.  To his credit, after much discussion, he did remove the charge for the pork chop so at least that's something.

Honestly, if it hadn't been for the cocktails, appetizers, dessert, and ambiance, The Corner Office might have been our first ever knife.  However; these things elevated them a level to be awarded a fork...barely.

MenuManiacs would not recommend The Corner Office for dinner; however, it is a fun place for happy hour, appetizers, and possibly coffee and dessert after a good show at Comedy Works or a play at the Denver Center.

Posted by Dinner is Coming - Ellen at 7:07 PM No comments: