The Fort first opened it's doors in February of 1963.  Built by William Lupkins, the well known adobe architect from Sante Fe, it was listed on the National Register of Historic Places on August 4, 2006, and is a replica of historic Bent's Fort.  In 1833, William and Charles Bent built the fort to trade with the Arapaho Plains Indians, Cheyenne Indians, as well as fur trappers for buffalo hides.  It was destroyed in 1849 under mysterious circumstances, although most people believe William Bent burned it down after abandoning the fort due to a cholera epidemic that struck the Oklahoma and other plains Indians.  Others believe it was destroyed to prevent the Government from taking their property.

The Fort is located in beautiful Morrison, Colorado and is not far from the famous Red Rocks Amphitheater.  One of the unique offerings The Fort offers is a limousine service through Denver Limo, Inc that offers transportation from as few 2 - 32 passengers.  If you use this service, be sure to mention The Fort to receive a FREE bottle of champagne!

There are so many fun stories about The Fort and it's history.  One example is Sissy Bear.  The owners adopted a two month old Canadian black bear cub and kept her at the restaurant.  They taught her many tricks including drinking root beer from a bottle and kissing the guests.  Photographs of Sissy adorn the walls of the restaurant, and you can read all about Sissy on The Fort's website.

Presidents, Mayors, Governors, sports legends, and actors have visited The Fort on many occasions.  While dining at The Fort, you may spot a plaque on the back of whichever chair was used  by a President at some point in their history.   If a celebrity visits, that person will sign the bottom of the chair.  Be sure to take a second to see if you are sitting on one of these "special" chairs on your visit.  When asked which celebrity visited the restaurant last, we were told it was Dog The Bounty Hunter.  When asked what he was like, we were told, "Orange."  Well played, people.  Well played.

There are several special meals and events that are offered at The Fort.  For example, Buffalo Prime Rib Weekends, Spring Specials, Mothers Day specials, Easter specials, and the Historic Tesoro Lecture Series focusing on the 19th century and early west.  Check The Fort's website to see a full list of events.

The Fort tries to serve the type of food that people ate along the Santa Fe Trail.  They serve a lot of game including buffalo, elk, and quail.  According to their website, they serve over 80,000 entrees of buffalo a year.  In the tradition of the Native Americans, they serve all parts of the buffalo including Rocky Mountain oysters, buffalo tongue, and the bone marrow which is known as "Prairie Butter". 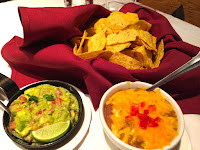 For appetizers we chose the Hot Sausage Bean Dip made with a delicious stout dark beer and Sam's Famous Guacamole which was listed as "Denver's Best Guacamole" on their menu.  Both were wonderful and we really liked the idea that you could either get a full order or a half order.  We haven't seen that option that often and we think it is a great idea that allows guests to try more of the menu.

We each ordered our main entrees off the Restaurant Week Menu.  Not only does this highlight their most popular dishes but it also saved us quite a bit of money.  We cannot stress how awesome Denver Restaurant Week is.  One of these entrees, if ordered off the original menu, would be about $50.  However, since it was listed on the restaurant week menu, it cost us just $30. That is a pretty substantial savings.  The first dish was a 6oz. Buffalo tenderloin filet served with a dinner salad and glazed carrots.  Also, we ordered a 5oz. Buffalo sirloin with a Teriyaki marinated Quail also served with a dinner salad and  glazed carrots.  Quail is not a common item found at many restaurants, so we were excited about trying it.  It was tender and flavorful and is a must have when you visit.

In addition, we also ordered an extra side of President Jefferson's favorite Mac N' Cheese Pudding.  He served this dish at the White House in the early 1800's.  Hail to the Chief's....side dish!.

Dessert consisted of The Fort's famous Negrita - a whipped dark chocolate mixed with Myer's rum and served in a chocolate tulip cup.  This was also listed on the Restaurant Week Menu.  In addition, we ordered the Chocolate Chilie Bourbon Cake - an Aztec combination of dark chocolate, walnuts, and New Mexico red chilies.  It was drizzled with bourbon and topped with a homemade hot fudge sauce.


Our server, Stevie, was a lot of fun.  She was knowledgeable of the restaurant and the history behind it.   For a great meal and a wonderful evening, we gave The Fort a fork.  Thank you for a wonderful night.